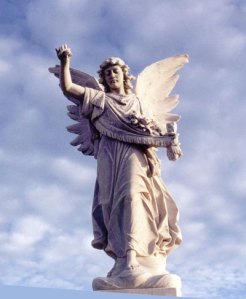 In high school, I worked for a time in a print shop. The manager there delighted in telling the story of the world’s worst counterfeiter. Supposedly, this counterfeiter had made a perfect copy of a $19 bill, except for the fact that it was half an inch too long. The print shop manager invariably dissolved in laughter when he told the story, and so it made quite a strong impression on me.

Whenever the subject of antichrist comes up, I think about that old joke because the antichrist is the ultimate counterfeit.

And that’s the problem I have with so many portrayals of the antichrist. They tend to emphasize the “anti” part to the exclusion of the “Christ” part. Popular portrayals of the antichrist usually depict him as sinister and evil. For example, Nikolae Carpathia, the antichrist character in the Left Behind * books and videos, is a scheming, murdering politician—and from Romania, no less, so that he speaks with the same type of accent we usually associate with Dracula. Is that really anybody’s idea of what Christ is like? Not exactly subtle, and not likely to be mistaken for Christ Himself.

Angel of Light
Yet that’s the whole point of the antichrist. He isn’t merely the adversary of Christ, but a usurper, an imposter, a pretender to the throne, one who wants what Christ has and what Christ is. He especially wants worship. To get what he wants, to persuade people to worship him, he has to convince them that he is the Christ. The counterfeit has to look like the genuine article.

Of course, different people have different ideas of what Jesus might look like, but no one really knows. Scripture warns us, however, that “Satan . . . masquerades as an angel of light” (2 Corinthians 11:14). The expression “angel of light” sounds about right for deception. Impressive, but vague.

Appeal to our highest aspirations
The Bible doesn’t give us any information about what the antichrist will look like physically, but it does tell us what his actions will look like, because we know the kinds of things Jesus said and did. And so it’s safe to say that the antichrist will speak beautiful and soothing words. He no doubt will speak of love, peace, justice, and universal brotherhood, because that’s what people expect. Indeed, it will be this appeal to our highest ideals and aspirations that will make his lies so irresistible.

Lucifer’s original desire, which led to his fall from heaven, was to become “like the Most High” (see Isaiah 14:14), to be like God Himself. And he used that same temptation with Eve. He told her that when she ate of the fruit of the tree of knowledge of good and evil, her eyes would be opened, and she would be like God (see Genesis 3:5). Being like God sounds like a really good thing. The great deceiver often cloaks his temptations in apparent goodness.

We see this demonstrated in the 2003 film Luther, in which an idealistic young man named Aleander comes to Rome. In the Vatican, a cardinal asks him, “What do you want most?”

Aleander replies, “To serve God with all my heart.” The cardinal warns him, “Then that is how you will be tempted.”

As the film progresses, we see how Aleander’s desire to serve God leads him to urge treachery, kidnapping, and murder. That’s how the devil works: he offers us the best to get us to do the worst.

In the wilderness, the devil offered Jesus good things, blessings even. He told Jesus he would give Him bread to sustain life, an opportunity to demonstrate the fulfillment of God’s promise of angelic deliverance, and lordship over all the kingdoms of the earth. In themselves, all these things are good. Some were even part of Christ’s mission and purpose. The evil lay in what the devil asked Jesus to do in order to achieve them. And he says the same thing to us: “Just do this one little thing, and all these good things can be yours as well.” That’s a trick known to every charlatan and con man.

And the devil is the father of all charlatans, the original con man. So as the antichrist, he will know all the right words to say, all the right emotional buttons to push, to make us feel certain that his every intention is purely benevolent, that following him will result only in joy. There will be enough truth in his words to make his lies believable, plenty of sugar to conceal the poison. But lies they will be. As Jesus said of him, “ ‘When he lies, he speaks his native language’ ” (John 8:44).

Signs and Wonders
Words, however, will not be enough. The Bible tells us that the antichrist will divert our attention from his lies with “ ‘signs and miracles’ ” (Mark 13:22). Revelation 13 depicts just such a miracle-working false prophet, who has Lamblike (that is, Christlike) characteristics, but he “spoke like a dragon,” who is Satan (Revelation 13:11; 12:9). And to conceal his lies, he “performed great and miraculous signs, even causing fire to come down from heaven to earth in full view of men. Because of the signs he was given power to do on behalf of the first beast, he deceived the inhabitants of the earth” (Revelation 13:13, 14).

However, there are some things the devil won’t be able to fake, and one of them is Christ’s second coming in majesty and glory. Revelation describes Jesus’ return: “Look, he is coming with the clouds, / and every eye will see him” (Revelation 1:7; italics added). Every human being on planet Earth will see Jesus when He returns.

Nevertheless, the devil will try. Jesus warned us that “ ‘if anyone tells you, “There he is, out in the desert,” do not go out; or, “Here he is, in the inner rooms,” do not believe it. For as lightning that comes from the east is visible even in the west, so will be the coming of the Son of Man’ ” (Matthew 24:26, 27). We learn two things from these verses. First, the antichrist apparently will try to fake Jesus’ return by appearing in different parts of the earth. But—and this is the second point—Christ’s return will command global attention. Jesus will appear in the sky, visible from one end of the earth to the other. Paul gave us another very important description of Christ’s second coming. He said, “For the Lord himself will come down from heaven, with a loud command, with the voice of the archangel and with the trumpet call of God” (1 Thessalonians 4:16, italics added).

Thus, in addition to being visible all over the world, Christ’s second coming will be very audible. You will hear the noise!

When Jesus returns to this earth, you’ll know it!

Avoiding deception
So how can you and I avoid being deceived by the antichrist when he appears?

Bankers and others who face the threat of counterfeiting know that the best way to detect a counterfeit is to be thoroughly familiar with the genuine article. So bank tellers don’t spend their time analyzing counterfeit currency. On the contrary, they concentrate on familiarizing themselves with the real thing.

The same method will work for us. It’s extremely important that we understand all that the Bible says about Christ’s genuine second coming, for only by its testimony will we understand the truth clearly enough to discern the antichrist’s false second coming. When we understand that Jesus will return in the clouds of heaven with power and glory and a great noise like a trumpet, we can easily recognize an imposter who shows up in different parts of the world masquerading as Christ.

While it’s important to know what the antichrist will look like and sound like, it’s much more important to know the real Christ. Jesus assures us, “ ‘My sheep listen to my voice; I know them, and they follow me. I give them eternal life, and they shall never perish; no one can snatch them out of my hand’ ” (John 10:27, 28). Those who know the real Jesus need not fear the false one. They know the genuine article. They talk to Him and listen to Him every day. They know His voice. And no one, neither the antichrist nor anyone else, can snatch them out of His hand.

If you know what the Bible says about Christ’s second coming, and if you know Christ personally, you needn’t fear being deceived by the antichrist when he shows up.